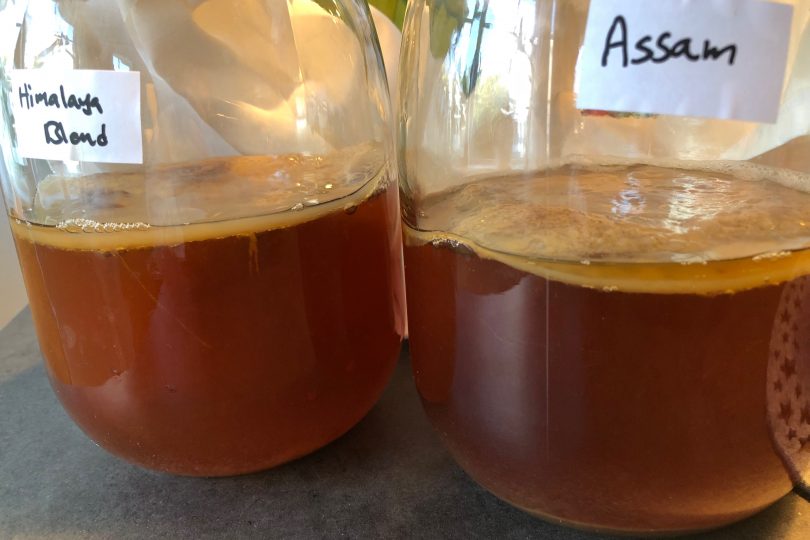 I will not go through what Kombucha is, there are enough descriptions if you google. Instead I’ll show you my very first try. In my point of view most guides, beginners guides to kombucha seems to show a corrected/manufactured version of production. Might have to do with starter fluid or choice of tea. I bought two black tea’s just to figure out if I feel any difference, Assam and Himalaya Blend. I prepared my tea, used a lot (three tea infusers for one litre of water), 30 min, cooled down, added starter and the yeast.

In the closet for seven days. The result where some greyisch culture on the bottom of the jar and the new ”scoby” where not that yellowisch as I saw in other movies. Might be cause of my choice of tea.

Anyhow, the smell and taste where in my opinion really nice. Assam a bit more sting than Himalayan that had a roundness to it. New batch while waiting for the above to finish. The ginger put a nice sting to the taste. Felt that going for different black teas had little impact, so I’ll continue with Assam. There seems to be as many opinions as people on the planet and the truth lies somewhere in between. But what I read, the Kombucha yeast, the scoby thrives in black tea and not in others, I might test mixing back with white or green. But for now I’ll continue to try different flavours. 2 litres of freshly brewed kombucha, where enough to start the second fermentation in three new bottles (0.5L). This time I added, raisins, apple and banana. I might go for some spices next time (vanilla and cinnamon).